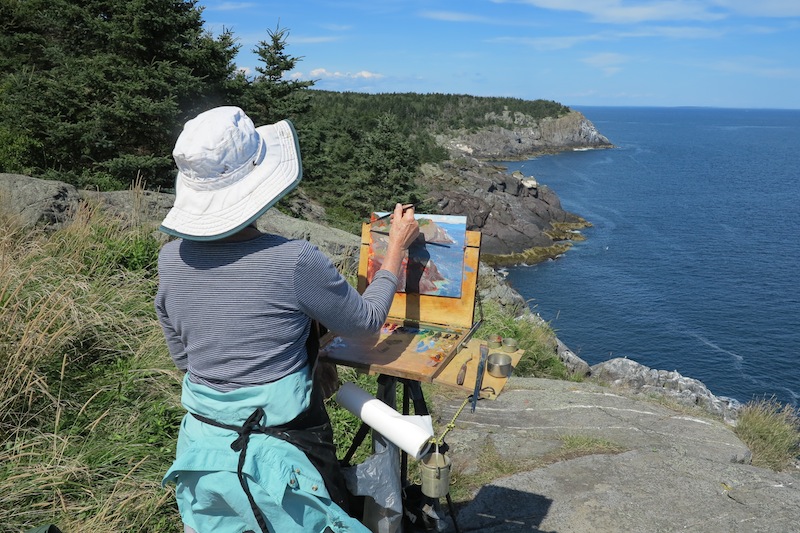 Continuing a lifelong connection to earth and ocean, Joyce Zavorskas has exhibited in London, Paris, New York, Philadelphia, California, as well as Boston, Cape Cod and the Islands. Her recent panoramic paintings and monotypes document the constantly changing coastal environment from dawn to dusk. She paints from direct observation in nature throughout the year, hiking cliffs, dunes and waterways with backpack and easel, documenting shifting shadows and tides. Monotypes are created in the colder winter months in her printmaking studio, where she also offers monotype, etching, and solar etching workshops.

Zavorskas has won numerous awards including the Ture Bengtz Printmaking Award in June 2010 at the South Shore Art Center, First Prize in Printmaking at the 17th Annual All Cape Cod Art Show at Creative Art Center in June 2012, and First Prize in Painting at the Copley Society and the Cape Cod Art Association..She exhibited plein air oils in a group exhibition About the Sea at South Street Gallery in August 2011 in Greenport, NY, and had a solo exhibition of abstract oils at the Cape Cod Museum of Art in Dennis, MA, July – September 2011.

Oil paintings featuring coastal erosion were exhibited in August 2011 at the Cape Cod Museum of Art, and in January 2014 at the Cape Cod National Seashore Visitor’s Center in Eastham. She has exhibited with Twenty-One in Truro for 20 years, and is a Copley Master in the Copley Society in Boston. Outside Gallery in North Adams, MA featured Zavorskas oils and viscosity etchings in 2016. Her artwork was included in 31 Women, an invitational exhibition March 2017, at the James Library in Norwell, MA, and at the Attleboro Museum in April 2017 with the group Twenty-One in Truro. A solo exhibition of 30 new monotypes at the Left Bank Gallery in August 2018 celebrates places where ocean meets sand.